Free shipping on orders over 100 euro

2007 - Regional Chamber of Commerce Požarevac - Annual award for the achieved business results;
2008 - Association of Business Women of Serbia - "Flower of Success" recognition to Biljana Jovanović for encouraging women's entrepreneurship;
2010 - Secretariat for Economy of the City Administration of the City of Belgrade - Acknowledgment for the most beautiful New Year's store window;
2010 - Association for Market Communications - UEPS recognition for customer relationship;
2011 - Mass Media - Regional “Business Partner 2011” award in fashion industry;
2011 – City of Požarevac - October Award of the City of Pozarevac for Outstanding Economic Results;
2011 - Foreign Investment and Export Promotion Agency (SIEPA) - Recognition to Biljana Jovanovic for Woman Entrepreneur for 2011;
2011 - Club of business journalists - Plaque "Business Lady 2011" to Biljana Jovanovic;
2011 - The Serbian Parliament of Companies appointed Biljana Jovanović as one of the delegates, recognizing the aspiration not only for the development of the Serbian fashion industry, but also for the business environment and economy of Serbia;
2013 - Serbian Chamber of Commerce - Award "Best from Serbia 2012" for the best local brand;
2013 - Charter "Kapetan Miša Anastasijević" for contribution to the promotion of the value of entrepreneurial and social creativity in the area of Braničevo and Podunavlje;,
2014 - Ernst & Young International Auditing & Consulting Company - Biljana Jovanovic was the only lady among the finalists of the prestigious award "EY Entrepreneur of the Year";
2014 - Biljana Jovanović awarded in Stockholm, among the first in the Balkans, a prestigious international "IWEC" recognition for the development of international business;
2014 - Association of Business Women of Serbia - recognition "Flower of Success" in the category "Most European Women's Company;
2015 - Ministry of Labour, Employment, Veterans' Affairs and Social Affairs, Occupational Safety and Health Administration - Charter, 28. April "for contribution in the field of safety and health at work and care of employees;
2015 - Market Communications Association - UEPS Award for integrated promotional campaign WARM WHITE by LUNA;
2016 - Award PLANETA BIZNIS of the business magazines BIZNIS and ECONOMETAR awarded to Biljana Jovanovic - for the best entrepreneur in 2015;
2016 - Regional award STVARATELJI ZA STOLJEĆA (CREATORS FOR THE CENTURIES), for contribution to the development of entrepreneurship in Central and South-Eastern Europe, awarded to Biljana Jovanovic and LUNA at the summit of the "300 Best" entrepreneurs in Dubrovnik.
2017 - Serbian Chamber of Commerce in cooperation with the Ministry of Trade, Tourism and Telecommunications.
- Recognition "Best from Serbia 2016" for the best corporate brand in the category of clothing, textiles, footwear;
2018 - Serbian Association of Managers - Special Award for "Business Excellence" Biljana Jovanovic;

They said about Luna....

Shine with Luna
Wonderful, creative, business look and excellent models for all generations. Luna is a choice you will simply shine in! - Mikica -

Well done, all praise
You are perfect in models and creations. Addition to quality and beautiful design - its all praise. - Verica -

Be the first to know about:
- Launching of Luna new collections
- Our sale events and special offers
- Discover new outfit inspirations
- Receive invitations to Luna events

Join us at LUNA newsletter

Over 250 elegant styles waiting for You 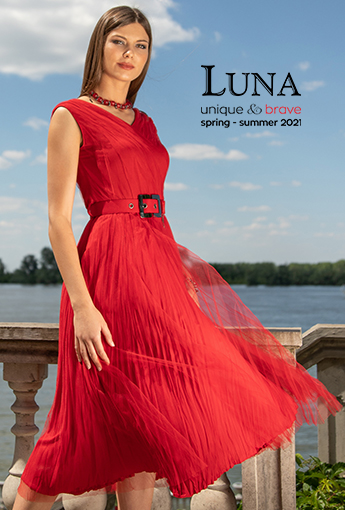 This website uses cookies
Dear user, our site uses cookies in order to improve the user experience. By continuing to browse and use our online store, you agree to the use of cookies.
Details